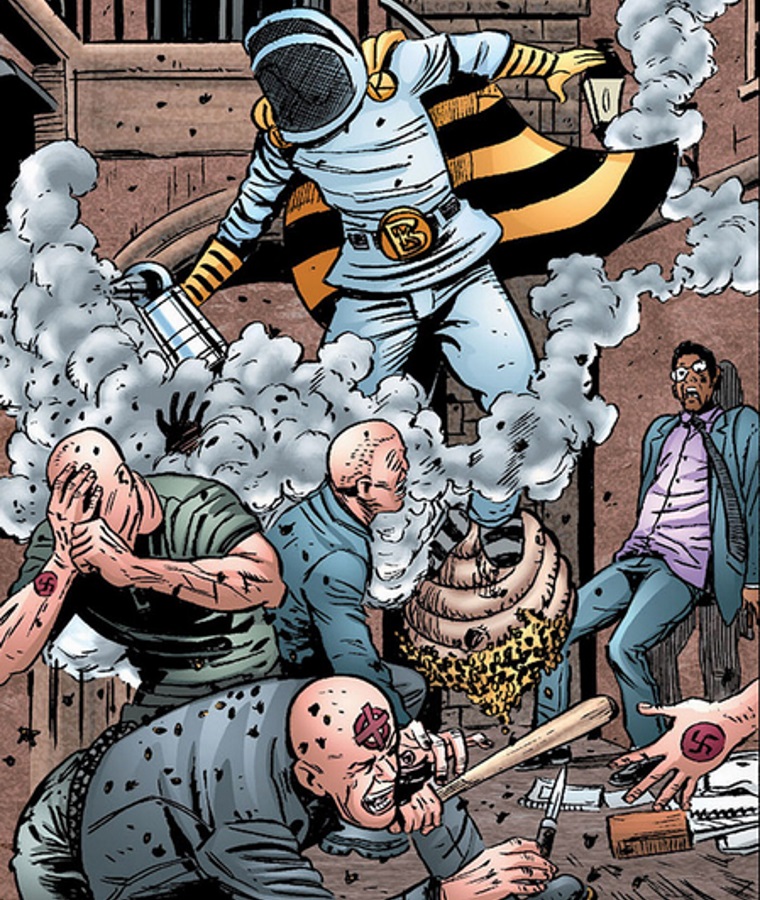 Dial H was an iteration of DC Comics’ Dial H for Hero franchise. The basic concept is that the protagonist(s) have a dial that, when activated, turns them into a superhero. This Beekeeper was one such transformation, so the panel above is actually someone else using the identity of this hero. But Dial H, at least, used the notion that the heroic identities made by the dial were actually the heroes of other universes, so somewhere out there this Beekeeper is probably fighting all types of crime.

That single panel is, as far as I know, the only appearance of this Beekeeper (I’m assuming they’re named “the Beekeeper” because of the B and K on the costume). Still, that single panel tells us an awful lot. This Beekeeper can sic bees on their enemies, which is a great, if standard, beekeeper ability. This Beekeeper also make good use of their smoker, also fairly standard, but depicted less frequently. But then: This Beekeeper Rides A Flying Hive! That’s new. It appears that the hive is actually carried by the swarm, and it must be assumed that the Beekeeper uses this hive as their primary mode of transportation, like the Green Goblin’s glider. It’s a pretty great visual. And on top of it all, sweet cape.

We don’t, sadly, know anything of this Beekeeper’s personality. The Dial would not have summoned this identity if they weren’t a good guy, but beyond that we know nothing. Did they swear revenge on crime after their Beekeeper parents were killed by mobsters? Was this Beekeeper chosen by bees to do good in the world because they were such a noble soul? Was radioactive bee-stinging involved? We don’t know. As such, it’s really hard to rate this Beekeeper with any real authority. But if anyone can do it, I can: