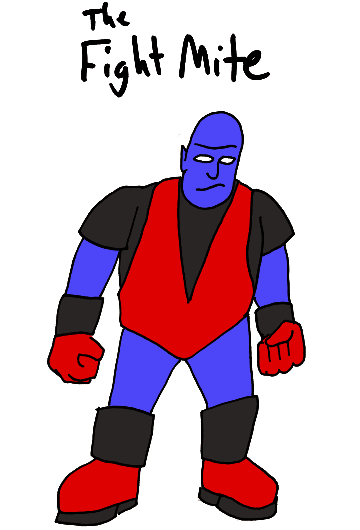 Two inches tall, but superhumanly strong, the Fight Mite has something to prove. He wants to prove that being tiny doesn’t mean he isn’t tough.

But what is the origin of the Fight Mite? Even he is uncertain. As far as he knows, he woke up in a crater over a decade ago, but before that he can remember nothing. Are there more like him? Is he alone? These are questions he occasionally ponders when he isn’t busy beating people up.

Not much to say here. He might make a good opponent for Drona of the Ultimate Ants, the only superhero I’ve created for this so far who would be smaller than Fight Mite. Of course, Fight Mite wants to prove himself against bigger foes, so losing to someone even smaller than him would be pretty humiliating. And then I didn’t want to think of a background for him, so I made him mysterious. That’s how real comic writers do it after all. 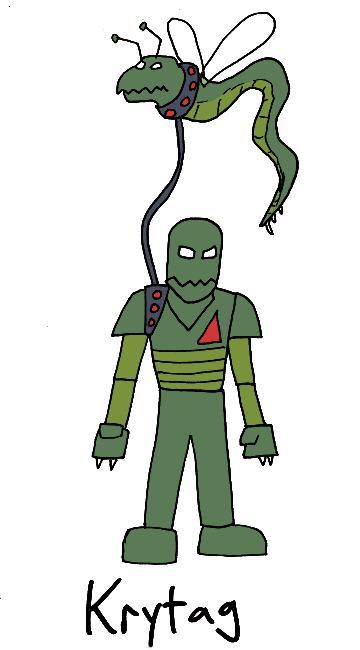 Krytag is a dual being, at once a humanoid being and, at the same time, a flying serpentine being. Though the bodies are connected by a tether, so they can’t get too far from one another, but each has abilities that can help Krytag in his role as the advance scout for an alien invasion. The humanoid body is strong and talented in alien martial arts, the serpent is amazingly quick and wrap itself around things with a powerful squeeze (it can also pick up its other half to carry it around). This singular double-team is more than a match for many of Earth’s protectors.

The planet Zesstak, ruled by a fascist dictatorship, has an army of such soldiers, each sent alone to a world to find out how conquerable they may be. Krytag is loyal to his species, but he is also enjoying the freedom his assignment. For the first time since being drafted into the army, he is on his own, making his own decisions. Earth represents a chance for Krytag to let loose, so he is not particularly interested in a speedy resolution to the mission.