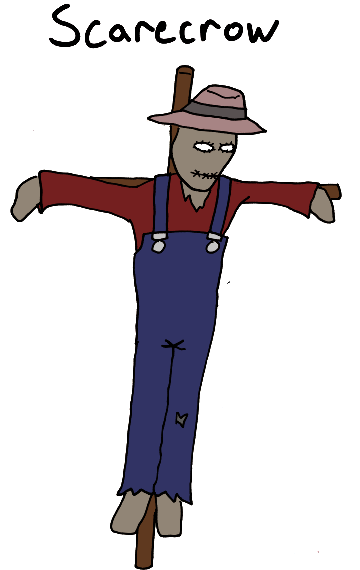 Suppose you find yourself in a rural community where everyone acts slightly strange. They all act nice enough, but they’re nervous, fidgety. The staff at the diner give you your meal in record time and try usher you out of town as quick as possible. You suspect they are hiding something, so after dark you sneak back into town. You find a crowd gathered around a scarecrow in what appears to be an ordinary field. Then you realize that the scarecrow is speaking. It is giving a speech to be precise. It promises the townsfolk that their time is coming. Soon the world will be theirs. Soon, everyone else will pay. The scarecrow’s eyes glow and so too do the townsfolk. It sounds crazy, but you learn that the scarecrow houses the spirit of an alien dictator, and it is filling the population of the small town with superhuman energies, making them into an army to conquer the Earth. Then you stumble and make a noise. The townsfolk look your way. Before you can blink, the mob of of them are on you. The scarecrow laughs maniacally as you lose consciousness. You awaken just as you are being strapped into a machine. The townsfolk tell you that you will soon be joining them.

Both Marvel and DC have villains named Scarecrow (the latter, being a Batman villain, is more widely known). Clearly the name is generic enough and anyone can use it, so I did. I went an entirely different way with it, though. 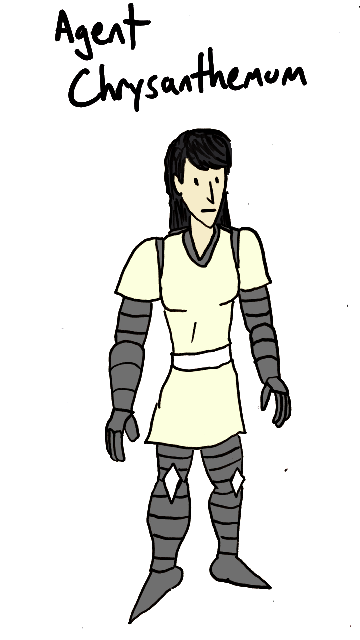 The “Flower Girls” were once the ultimate team of assassins. Agents Rose, Daisy, Tulip, Carnation, Lily, and Chrysanthemum were an unstoppable cyborg force, until they were stopped. Their rivals joined forces to bring the Girls down, and the result was a bloody war. Ultimately, only Chrysanthemum survived. Of her team, and of the rivals.

All alone, but still a killer cyborg, and now the best that the market had to offer, Agent Chrysanthemum continues to take on missions of espionage and assassination.

I drew a cyborg and had no idea what to do with her. This will have to do. I suspect I’ve probably done a few too many villains-for-hire over the course of my Supervillain year, but hey, what can I say? That’s the sort of thing that strikes me as most villainous. Batman can pick on people with mental disabilities all he wants, it is the people who willingly do bad things for their own profit that I don’t like. Still, hopefully I don’t have a lot more of it in the time remaining.