I continue my sketching villains for the hero I created in Junior High: 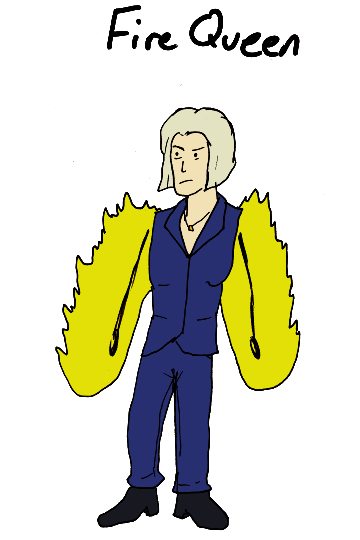 The Fire Queen is Janet Faulker, the matriarch of a powerful family of supervillains. The ability to create and control flames has been in her family family, which has made it easy to make a fortune as arsonists, saboteurs, enforcers and assassins. In time, this family became the top crime family not only in their home country of New Zealand, but throughout much of the Southern Hemisphere. But now, the family has a problem. One of Janet’s daughters, Jessica, has gone against the family. Now calling herself “Combustion” Jessica has become a superhero, fighting not only crime in America, but also against her flame-slinging family back home. Janet does not hate her daughter, she does not want to kill her, but sometimes a mother has to do something she doesn’t want to do, for the good of the rest of her family. Janet can’t let one upstart child ruin all the hard work her parents and grandparents had put into their lives. Janet can’t let one runaway tear down everything that should provide for the other children and grandchildren. Janet has to kill Combustion and as many of her superhero friends as it takes.

I had mentioned the Fire Queen in my childhood notes, but never did a sketch. I basically went with a woman with even more fire than Combustion had. With a goal that simple, I feel I was successful. 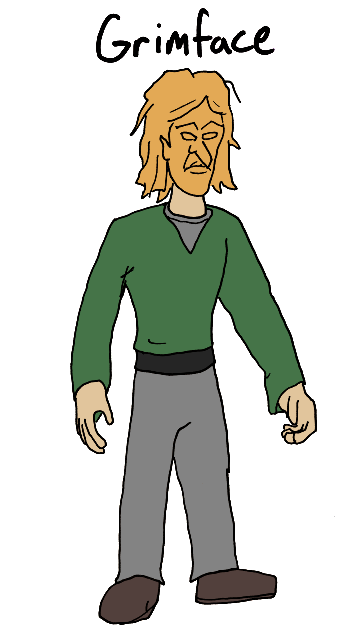 Grimface has no memory of his childhood. As far as he knows, he has always been as he is now. His cyborg enhancements made him an ideal assassin of superhuman targets, but now he is on his own. He has learned enough to blend in. He poses as a homeless man and lives on the streets in plain sight, but where nobody looks. But he always carries a bag with him, in which he keeps a strange mask. When he wants something, he wears the mask, and there are few who can stop him from getting what he wants.

Unlike all the other villains this month, Grimface was not something I dug up in my notes. Sure I have dozens of other Justice-Man villains among those notes that I could easily have thrown in here, but I figure that if my imaginary character has continued having imaginary adventures since my junior high years, he has probably made some new enemies in that time. (Besides, Super Sunday is supposed to be about me creating new things, so next week we get back to that.)