I will now continue my month-long look at supervillains I created for the Justice-Man character when I was little: 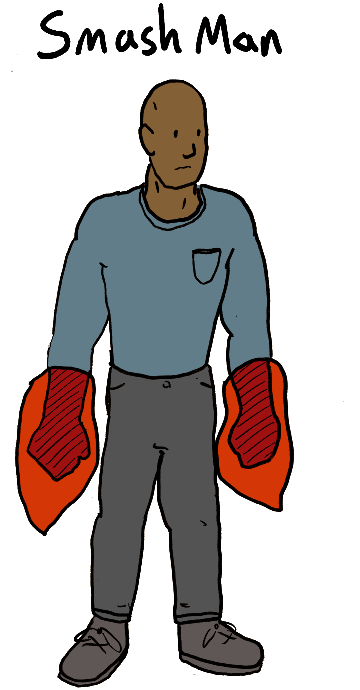 An expert in super-genetic sciences, Rich Rogers originally made a name for himself as a supercriminal by enhancing himself so that he could throw glowing punches strong enough to shatter stone. With these powers he did the usual thing: bank robberies and superhero fights, but eventually he wound up in prison.

But the Chopper broke him out and put him in charge of the science division of his massive criminal empire. With nearly unlimited resources at his command, Smash Man now routinely makes clones and strange monsters, as well as giving superhuman abilities to those who can afford it. He is one of the Chopper’s most loyal agents, so much so that he is considered by some to be second-in-command, though Chopper is not willing to officially give that role to anyone. This has caused tension among some of the other potential seconds in command (including one of Chopper’s sons), but so everyone is too scared of Chopper to risk being upfront about these issues.

I assume that, as a child, I thought I was being very clever by making a guy called something like “Smash Man” a brilliant scientist. Also, there was definitely my standard “glowing hands to avoid drawing hands” thing in play here. 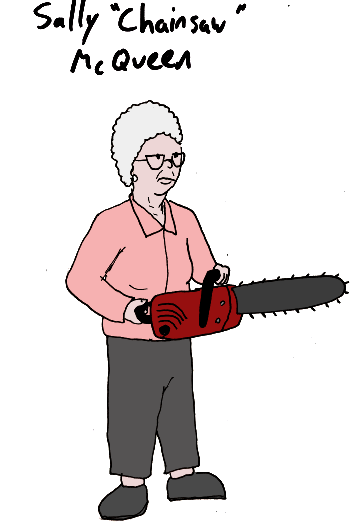 Sally McQueen, unlike the majority of old people, is handy with a chainsaw. Also, she’s a mass murderer. For decades this old lady lured or kidnapped or stalked people and tortured them to death. Any investigators who came close to discovering her identity would wind up dead, including a police tactics units who raided her home and were slaughtered by a variety of traps. It was not until Justice-Man took an interest in the case that the murderous career of Chainsaw McQueen came to an end.

I’ve been mostly drawing my Justice-Man characters as if they were fifteen years older than they were when I created them, but McQueen was already elderly back then. If I got to tell stories of Justice-Man, I’d have to assume she was an early enemy of Justice-Man and has probably since died in prison. Oh well!