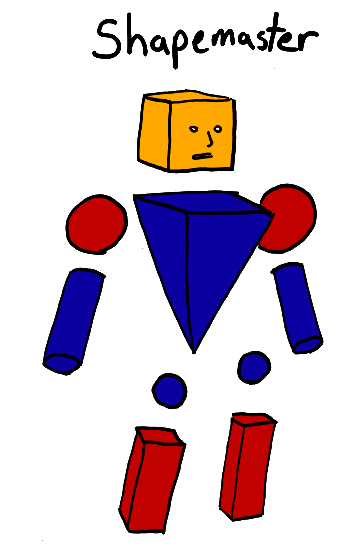 Herb Caesar was a young man when he gained the power to change into shapes. But he couldn’t turn into other people, or even animals or even, say, a car. He is limited to simple shapes. Squares, cubes, spheres, etc. Still, he was inventive, and found many ways to use these powers in creative ways. For several years Herb fought crime as the Shapemaster, but it never seemed to pay off for Herb. He couldn’t pay his bills, he couldn’t keep a job. A supervillain killed his best friend, and a girlfriend turned into another supervillain and blew up his house. Eventually he realized it wasn’t worth it. To get any satisfaction, he decided, he had to look out for Number One.

In real superhero comics, well mainstream real superhero comics anyway, nothing ever changes. No superhero will ever go bad for real. It might even last a few years, but the non-stop soap opera of it requires that every twist is eventually, shockingly twisted back. Anyway, with Shapemaster I can pretend it happened in my little superhero universe anyway. 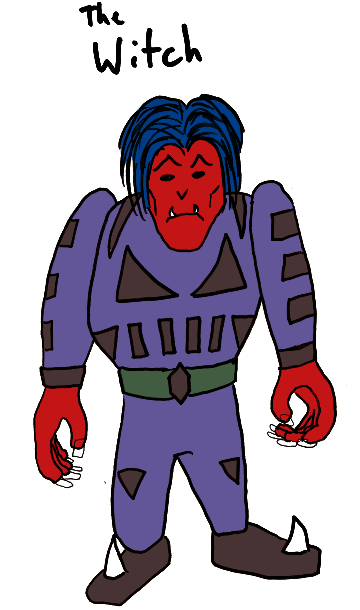 Three hundred years ago a woman was accused to consorting with demons to get mystical power. She totally had done exactly that. Those who accused her couldn’t do a damn thing because she was a magical killing machine. Any of her accusers that she hadn’t drowned or crushed or burned at the stake decided that it wasn’t worth the risk of even trying to stop her.

Now, in the present, the Witch still lives. She has used her mystical powers to found a worldwide criminal empire and only the emergence of these newfangled “super heroes” has ever posed any threat to her. She will have to deal with them.

Here I wanted to take the idea of a witch and do it differently. I wanted the opposite of every good witch idea, but also to avoid the standard look of a cartoon witch with green skin and black hat and all that. I planned on giving her a better name, but then I decided I liked the simplicity as an excuse to stop trying to think one up.

Color is back! And I don’t just mean for this post! Over the last week, and at the expense of working on SecGov, I have gone back through Super Sunday and colored them all. They are all now in color! I figure the Internet will care more if they’re flashier, right? If anyone cares to go back through the Super Sunday tag, they’ll find a whole colorful world of superheroes and villains. This will make any comments I made about colors in the posts obsolete, but that’s probably worth it.