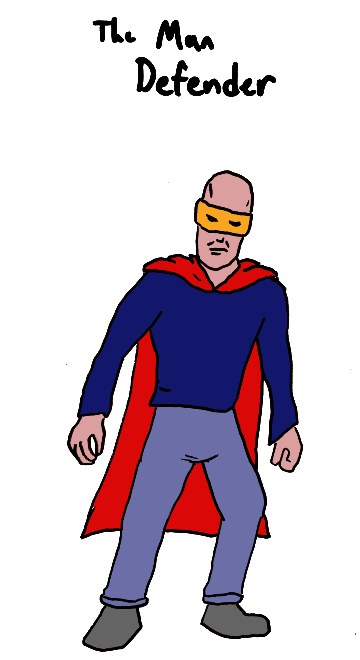 Danny Adam Stark was just a regular guy in his early twenties until a chemically-infused pollution cloud caused a strange atmospheric disturbance and a bolt of lightning struck young Danny. After some time in hospital, his life continued. Over time he began to notice he was changing. He’d grown stronger and faster. He discovered he could jump almost a mile and shrug off a bullet to the face. Danny decided to use his powers to help those most in need to help: men. Danny sees society’s attempts to emasculate men as the primary cause of all the problems and if only the roles of the genders can be fixed, things will return to the way they were in the good old days. With this goal, the Man Defender will strike out against prominent feminists and lawmakers (especially females) who are trying to change things. He will break accused rapists out of jail, because the women were obviously asking for it. As far as he is concerned, he is the only hero addressing these issues of misandry and all the others are pathetic failures.

I’ve been doing a lot of world building stuff with the Supervillain Sunday sketches, which I enjoy, but I haven’t done as much addressing issues as I did with the Superhero Sundays. One of things a superhero story can do is use villains to represent real problems in the world. ‘Cause then we get to have a superhero beat up those problems, and that can be fun. 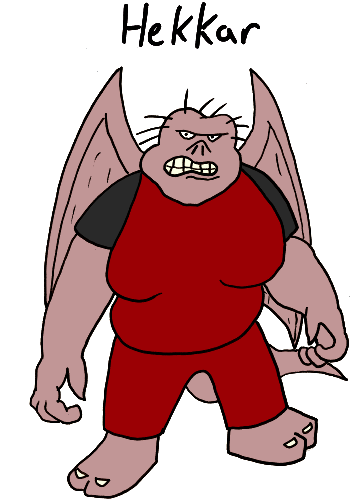 The demon-sorceress Hekkar is obsessed with gaining more power through a process known as “eating magic users”. Merging with the mystically altered flesh of those who use magic, Hekkar grows stronger, though what her goals may be beyond that are not known. But there is one who Hekkar can’t devour for power: the Conjuroid. The demon-fighting robot hero is the ideal defense against this demonic glutton, though as she is quick to point out, isn’t the Conjuroid just another being that destroys demons in its own quest to become stronger? Are they so different?

I admit, this one isn’t addressing an issue, really. I mean, sure, I worry about the threat of magicians being devoured as much as the next person, but the next person doesn’t care that much either.