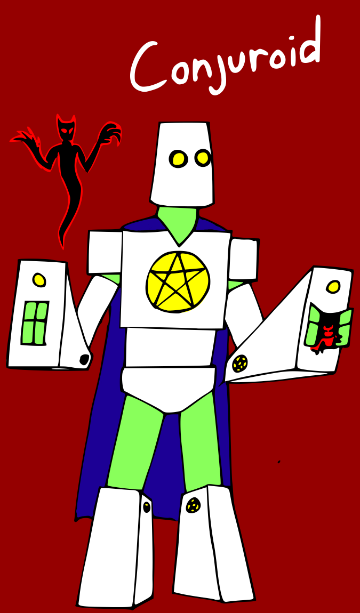 Malevolent spirits waft through the cold night. Demonic imps lurk in the shadows, waiting for a chance to strike. Evil is on the Earth and humanity needs a protector. The Conjuroid is that protector. Fashioned from metals from beyond this world, this robotic champion tracks down demons and captures them, storing them inside its own enchanted chassis. The captured demons are then offered a choice: They can seek redemption by serving the Conjuroid, or they can remain trapped for eternity. As a result, the Conjuroid has a legion of demons and spirits willing to serve it in its quest.

I admit it: I’ve got a weakness for a robot in a cape. There needs to be more robots in capes. Sure, there are a few high profile superheroes who are androids wearing capes, like the Vision or DC’s Red Tornado. But those are practically just humans in appearance. What I want is proper robots in capes. The only one I can think of right now is Bender from Futurama as Super King. That is not enough. Not nearly enough. (See also Ezekiel Purple in Secret Government Robots.)

I didn’t know where I was going when I started drawing this one. I knew I wanted a robot, but this fusion of robotic and the supernatural just took shape as I was going. I guess the basic idea here is that Conjuroid is basically a walking containment unit that will shoot a demon into a bad guy’s face when the situation calls for it. I suspect that the situation would call for it a lot.

(Guest Coloring by my friend @sanityormadness)