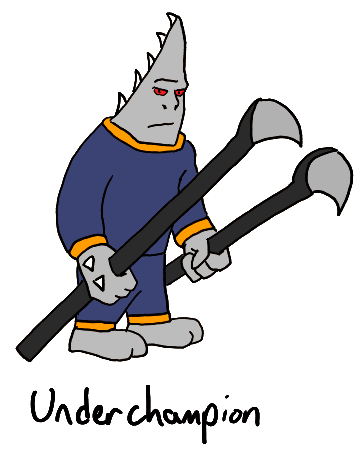 In the city of Cemeteria there is a competition. Every year the city’s greatest warriors gather for contests of strength, speed, and intelligence with the winner gaining the title of Underchampion. Traditionally the Underchampion has been awarded a position as top soldier of the royal army, but the latest winner is not particularly pleased with the current government. Rejecting the traditional post, the Underchampion is actively leading a rebellious group against Queen Deathknell with intent to make the Underchampion the ruler of the sacred city.

I like this idea because in addition to stories about the Underchampion sending his forces against those of Queen Deathknell, I could also do stories of the two of them competing in the Cemeteria contests. On some level, I’m confident that this was inspired by the rivalry between T’Challa and Erik Killmonger in Black Panther comics. 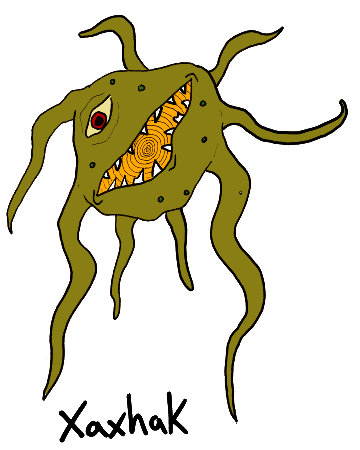 Mentions of Xaxhak can be found in ancient scrolls in the Mystical Library of Vodin, on stone tablets discovered in the ruins of a Scottish castle, and carved onto a wall at the scene of a massacre in the middle of Los Angeles. Cave paintings have even been discovered depicting an angry mouth eating human figures. Since as long as humanity has known, every 28 years, Xaxhak arrives on Earth with the intention of devouring 72 human beings. Unfortunately for Kelly Doukas, the twenty-eighth year has just come again.

When I drew Xaxhak (done with intention of having an easy drawing in addition to filling the supernatural being niche), I looked at the thing and though “This thing should be called ‘The Carnivortex'”. Unfortunately, looking the word up on Google, I found out that that was the name of some band’s album. Oh well. The choice to make her the villain for Kelly was just a whim of putting some things together that I didn’t intend, which has worked out well for me so far.