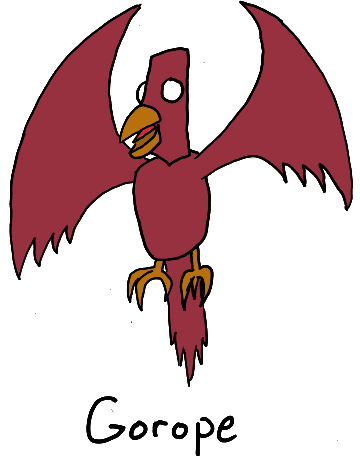 A bird mutated by Strange Cosmic Energy, the nearly mindess beast called Gorope is prone to swooping in on coastal cities and attacking the populace. Too powerful for conventional military technologies to destroy, Gorope can only be driven away by superhuman intervention. But always it returns to its nest to heal up and attack again.

One thing I want from superhero comics is less focus on fighting supervillains. There should be more superheroes working to prevent damage from natural disasters or fighting fires and stuff. I am sure that writers feel like they’d be missing something without an antagonist with actual emotions, but I say: just write better. Anyway, I can’t really do a whole lot of “not supervillains” in a year of creating supervillains. But a monster that is just a bird with no actual malice, that’s something slightly different, I guess. Also, the name “Gorope” comes from my ancient notes. I have no idea what Little Me thought that name might mean, but whatever residue of it remains in my brain tells me it is pronounced so that the last syllable sounds like “-ay”. 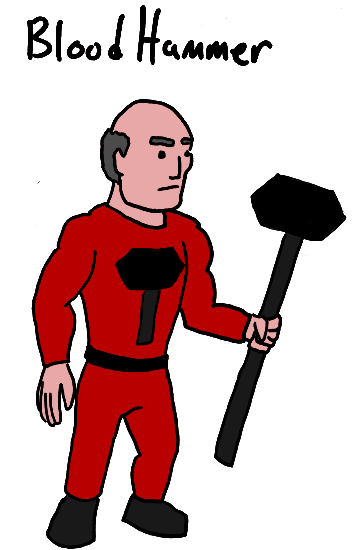 In the aftermath of a superhuman battle in Miami, the superhero Manny Magnificent was badly wounded, a chunk of metal having smashed him in the head. While most of the crowd was gawking as the other heroes tried to help their wounded comrade, others began looting. Among those was Pete Lewis, who noticed the chunk of metal with glowing superhuman blood on it. Coming into contact with this blood he felt woozy at first, but soon noticed that he was getting stronger. Taking the metal shard, Lewis fashioned it into a hammer. As long as he and it are close together, he grows strong and nearly indestructible. As you might expect from a looter, he didn’t use these powers to make the world a better place.

Like Karl Franklin, Bloodhammer with a character with dwarfism who was in my notes (though only as a sketch, all story details were made up as of this post). There are more dwarf characters in my notes as well. I gather that Little Me was trying to create a pretty inclusive universe. My single favorite thing about this character: he has a picture of his hammer on his costume. That’s dedication.