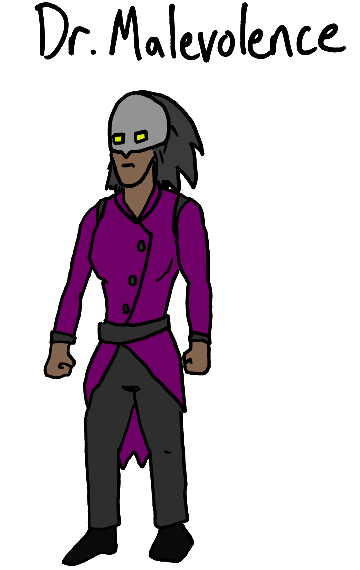 Dr. Janessa Tindall will show them all! They laughed at her theories about a connection between the human mind and teleportation. Tindall turned to criminal backers to fund her projects. She still failed. Her attempt to prove her findings resulted in a terrible disaster and dozens were killed. Tindall was sent to prison. But her criminal backers did not forget her, they broke her out of prison and put her to work as their own weapon designer. Tindall killed them all for their insolence and went on to be her own criminal, holding cities hostage and building rampaging robots. Nobody would ever laugh at her again.

The state of the Female Mad Scientist in fiction is one that could use some improvement (here is an article on the topic). Heck, women are underrepresented as regular scientists too, and not just in fiction. In the real world even. But given my belief that how we shape our fiction can affect how we see our world, it is my duty to pump out some lady science-types. And this is villains year, both of today’s villains are Mad Scientists Who Aren’t Dudes. Dr. Malevolence here is, I guess, more of a standard Crime Scientist that you’ve gotta have if you are dealing with superheroes. 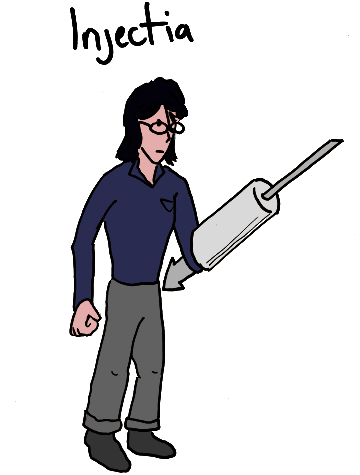 Some people might make a poor life choice in a fleeting moment after having a bad idea, but Tara Jensen was truly devoted to her bad idea. Removing her left arm, Tara has replaced the limb with a giant syringe. But the device is more than a simple needle, it contains high-tech workings that allow her to work with chemicals and formulas and viruses, giving her various ways to utilize her new appendage. Naturally, Tara has styled herself as the supervillain Injectia and embarked on a career of crime with no end in mind greater than continuing her messing around with chemicals and viruses. She has become a primary target for the government’s hero, the Securer.

Not much to add. Another mad scientist, this one perhaps more of the kind of obsession with her interests than a desire for revenge or anything. I think Injectia would barely care about people who have wronged her or who are trying to capture her. She’s just really interested in her science and doesn’t care who she hurts in the process.