On his deathbed, Carl Allen revealed something to his son Dwayne: there is a magic sword which has been passed down in their family for many generations that can transform its wielder into a winged warrior. The catch is, the body they transform into is that of an angelic white man, and the Allen family is black. Carl Allen refused to use the sword, content to live a quiet life uncomplicated by either adventure or controversy, but Dwayne can not do the same. While he has trouble adjusting to existing in a body not his own, Dwayne begins a superhero career, all the while investigating the origin of the sword and its history with his family.

Basically, while I was trying to decide what kind of obsolete weapon I wanted to base a superhero around, I noticed that falchions are a type of sword. I threw some wings on there, which allowed for some alliteration in his name, and I threw in a Shazam-style transformation with a race aspect to allow for story possibilities, and we’re done. Done. 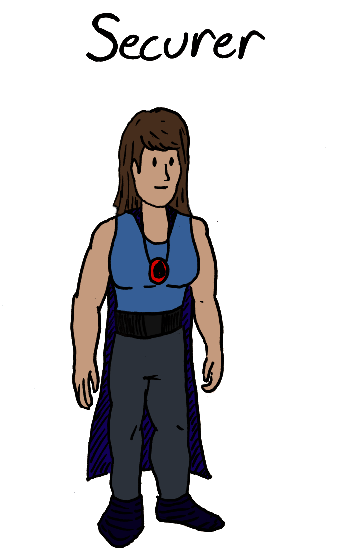 Nora Quentin, FBI agent, was caught in the explosion of a mad scientist’s drug lab. The strange chemical mix that bombarded Nora’s body gave her superhuman powers. The FBI saw an opportunity to have their own superhero agent and created the identity of “The Securer” for Nora and she is now the Bureau’s first line of defense against superhuman threats.

I fully admit that it is getting hard to come up with new issues that I need to address in superhero form. More than once during this year of superhero creation I have noted that there need to be more lady superheroes whose ladiness is not their defining quality. Thus, once again, I’ve got a woman with a super-generic super name and that is that. Repeatedly fighting against society’s problems with more and more characters would be the most efficient way to make a difference, but it does cause me to have to repeat myself a whole bunch over here… (The chemical explosion origin is also really repetitive, but who is counting?)