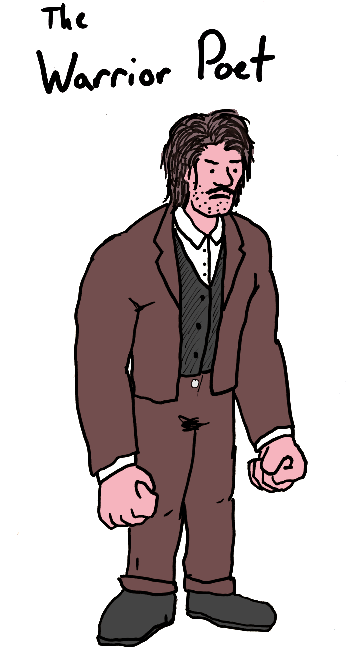 Oswald K. Whittaker was a weak, sickly child. Never able to live up to the standards of manhood set by his father, a famous footballer, young Oswald spent his days in books. But when Oswald turned sixteen, the secret magic blessing that runs in the family line granted him with amazing strength and power (and his father lost his). Now, with the strength that rivaled his intellect, Oswald became the Warrior Poet, a super-strong wordsmith who is willing to break any laws he feels he must to create a work of art.

I’ve always liked when you get a scientist villain who robs for chemicals or computer parts for their experiments, instead of just going for money. The Warrior Poet here is like that, but instead of science, he is a patron of the arts. He might break into an art museum to steal some painting that he wants to write some ekphrasistic poetry about, or he might break into a library to steal a rare first edition of some obscure book of sonnets. 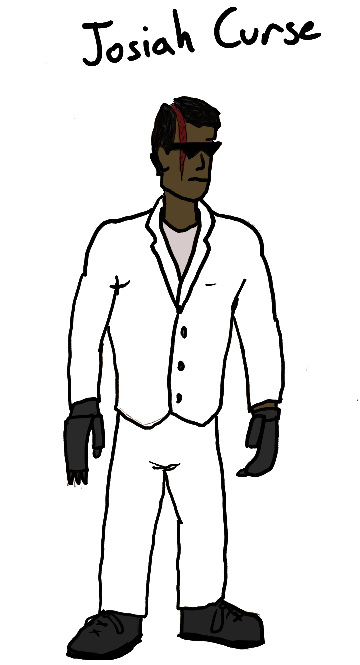 With a distinctive facial scar and trademark clawed hand weapons, Josiah Curse is not an assassin you hire for subtlety. Josiah Curse is hired when you want to make a point. You’re saying, “This is what happens to those who have wronged me. You don’t want this to happen to you.”

Josiah Curse once drove a motorcycle off a cliff and landed on his target’s face. He once stole a bunch of monkeys that had been used for science experiments, kicked them until they were all really pissed off, then locked them in a room with a target. He once threw a javelin into his target and it was then struck by lightning. He once bit a guy’s forehead off and held him down while he bled to death. He’s basically not a nice guy.

I didn’t really have any big plan with this one. I wanted another street-level hitman type, and the name just came to me, then I drew this guy. Maybe he runs afoul of Marv Thinker on some case, why not?