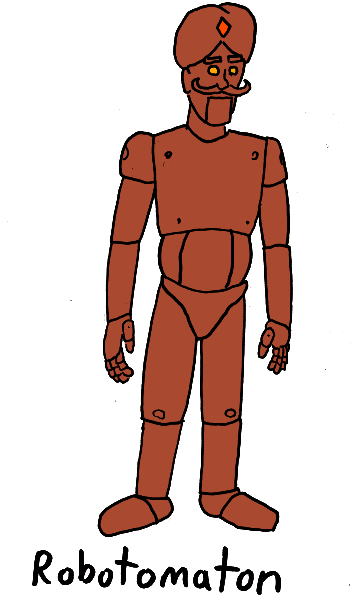 When the Robotomaton was first built, it was simply a machine, an unthinking device designed to entertain at science expos and fairs or simply by walking around. Over the course of decades, its creators continued to upgrade the machine and add more gadgets and tricks for the machine to perform. Eventually, though, it started acting in ways that they could not explain. The Robotomaton is purely clockwork, though. There is no actual “mind” in the machine, not even in computer form, but the Robotomaton had apparently developed consciousness. But nobody, including the Robotomaton itself, can explain where or when that consciousness began.

Now that it could think and reason for itself, the Robotomaton sought to find a place in society, but society was hesitant to allow it. To gain the trust of humanity, the Robotomaton took to performing humanitarian tasks like fighting fires and crime. When that became a habit, the Robotomaton found its place: as a superhero.

I mentioned with HAULER that I think robot sentience is taken for granted in superhero comics. So while HAULER would be a robot without that intelligence, the Robotomaton could be used to explore the concept philosophically. How did a clockwork man become intelligent, and is it any different than a human is intelligent? These are questions that the Robotomaton would struggle with regularly. Between punching things. 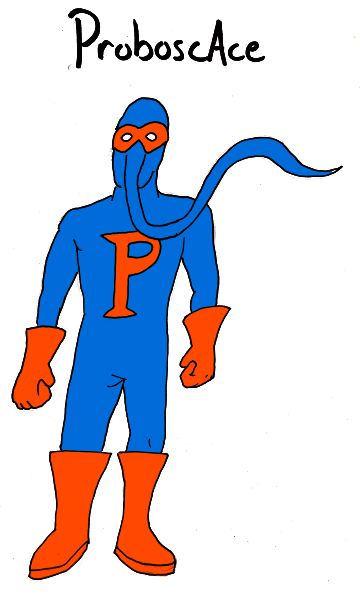 While piloting an experimental aircraft, test pilot Captain Lloyd Taylor encountered an unidentified flying object. He lost control of his plane, then lost consciousness. A week later Taylor awoke as the military found him and the plane safely resting in a forest, but Taylor now had some sort of metallic appendage attached to his face. While he could not account for his whereabouts, Taylor soon discovered that the prehensile proboscis was a handy tool that could lift incredibly heavy objcts, somehow without ripping his face off, and even defect bullets. Making the most of this strange turn of events and he became the military’s new secret weapon: The ProboscAce!

I’m not going to pretend that I can justify this one as anything more than a silly idea that came to me and I knew I had to commit. I didn’t even put enough thought into it to make the pilot aspect as a conscious decision, but once I had a name that included the word “Ace” and I saw those goggle-things that almost remind me of aviation goggles, it all came together. I am confident that if I told a ProboscAce story he would be a bit of a show-off and I can guarantee that he would fly planes with his feet up, his hands behind his head, and his proboscis on the wheel.