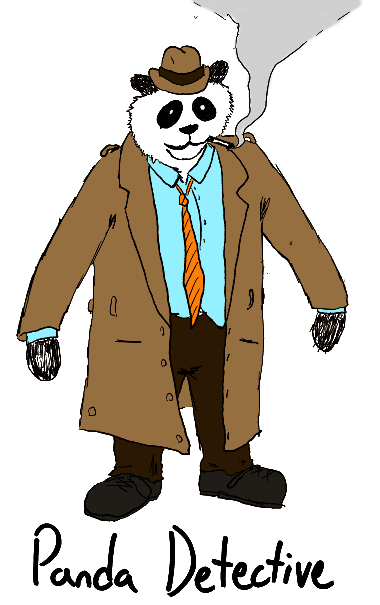 In Los Angeles there is a private investigator who is willing to take on any case, no matter how strange it may sound. If nobody believes about the ghost that has been following you, or the UFO that kidnapped your parents, and the police won’t listen as to your claim that fish-men stole your car, there is a detective who will listen to any case. The Panda Detective knows that the world is full of strange and dangerous things. After all, he is one.

Panda Detective is a character who, until this sketch, was just that name scrawled on a page of notes. I know the sort of things I like in superhero comics, and this sort of weird thing is exactly it. I’ve never read a comic with DC’s Detective Chimp, but the fact that character even exists makes me feel better inside.

I would also say that, in my head at least, there is a strong connection between the type of adventures a private eye and a superhero should be having. You’ve got plenty of superheroes who solve mysteries (Batman, notably, is supposed to be the world’s greatest detective who, for whatever reason, dresses in a bat costume), and you’ve got heroes that work for the government or law enforcement agencies (usually the “big time” heroes like the Avengers). But, for some reason, most superheroes are just guys who wander around looking for things to fight. The flaws with these Patrolling Superheroes is that it means that most of the adventures they find like this are crimes in progress. If these guys maybe got a license and opened an office where civilians could reach them, suddenly you have a wider variety of potential starting points for superhero fun.

I think a part of this problem, though, is the way superhero adventures (and action adventures in general) have been scaled up so much over the last few decades. Saving a family is not as important as saving a city, or a world, or multiple universes. With adventures having to have such high stakes, the stories tend to start with something smaller blowing up or dozens of people being killed. Or, for a solo hero, like most of those who do the patrols, the stakes have to involve some “this time it is personal” level, so you can just have villains come right out and attack the hero. Superheroes who just solve the problems of people are not as common, and that bugs me. So… Panda Detective.