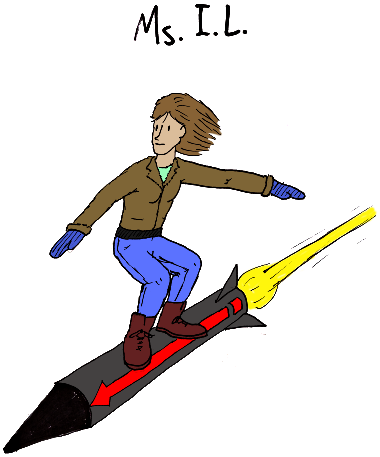 Isabel Langdon’s mother worked for the military, designing rockets and such. Specifically, she was designing a thought-controlled missile guidance system that would have allowed soldiers in the battlefield to call in a rocket salvo and “think” the rockets toward their targets, as well as being able to use the projectiles to bring in supplies or get wounded to hospital. But this experiment was brought to an end when spies working for an enemy group attacked the laboratory, and they had teenaged Isabel as a hostage. They tried to force Isabel’s mother to make them some weapons, but the scientist tricked the terrorists by, at the last moment, turning the thought control machine on herself. She used the mind controlled rockets to stop the terrorist’s plot, but was herself shot in the process. Isabel, seeing what he mother had done, replicated the process on herself and used her powers, and the remaining missiles to capture those who had killed her mother. Though Isabel has no interest in going to war, her mother’s military friends arrange for her to get a job with the police using her new powers to fight crime. So now she’s got a big rocket without a warhead to use as transportation and she’s always tinkering with potential other devices like spy camera rockets, glue rockets, and so on.

The inspiration for this character, and still my favorite thing, is the terrible, terrible pun of the name “Ms. I. L.” Once I had that, it was just a matter of doing a sketch and being done with it. I think the most thought that went into it was “It’s cold up there, so: mittens” which is fine with me because then I didn’t have to draw hands. I think that if I were to do anything further with Isabel, it would have to be in animation. A rocket-riding superhero is something that, I figure, is going to work best when you can see the speed in action. Lots of flying chases and whipping around the cityscape. Also, I’d probably rework the missile itself so that it had a flat bit on top, kinda skateboard-style, to stand on instead of the awkward-balancing-act conical style that I’ve drawn here. As I write that I noted the similarities to a Marvel character I like, the Rocket Racer, who actually does ride a rocket-powered skateboard. I have to wonder why there aren’t more superheroes like this.