I have, in the past, put more thought than is necessary into the topic of superheroes who were probably just created, used, and forgotten by their creators. The previous ones were used to decorate a box of tissues, but today’s offering is a couple of superheroes even more mercantile: They’re from ads.

Working, as I do, in the industry of putting paper with ads on it into people’s homes, I occasionally pay attention to those ads. Basically this is only when they have superheroes in them… Anyway, over the couple years since that last post, I’ve bothered to take two of these superhero-using ads home and I will now introduce you all to those heroes.

(I won’t be showing what the ads were for, though. I’m not getting paid, why should I?) 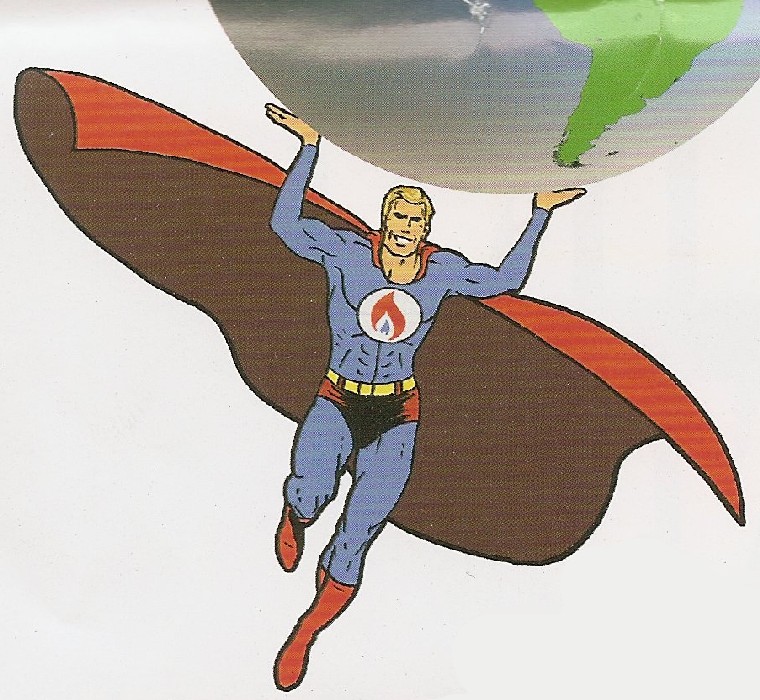 This man is basically Superman. Anyone can see this. This is Superman, but blonde. And he has a different symbol. A fiery symbol. This guy is depicted lifting the world (though this is probably metaphorical. Or at least a model world. I’m ruling out that he is giant. I won’t allow it.) he probably has Superhuman strength on a Superman level. He can also clearly fly. It would be easy to assume that this guy has your basic Superman Powers powerset.

Except fire is apparently enough of a recurring for this guy that it is his chest insignia. This implies he has more than just heat vision. This could come in the form of fire-breath replacing the ice breath of superman, but I’m going to assume more. I’m guessing this guy has full pyrokinesis. So what we have here is this guy who can fly, is super strong, can probably go really fast, and can generate and control fires. Sounds like a pretty heavy hitter to me. 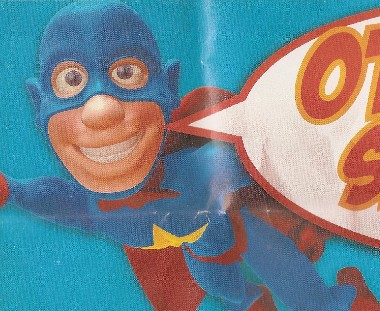 This second guy looks less stereotypically like a superhero. Your typical superhuman guardian has a strong square jaw and impossibly muscular physique, but this guy, owing perhaps to the cartoony style he has been rendered in, looks like more of a goof. The smile isn’t helping. It’s also worth noting that this guy is the first of the ones I’ve discussed so far who is actively pitching the product he was designed to pitch, instead of just looking superheroic on an advertisement. This guy is actively looking the reader in the eye and pointing to say: “Check out this deal here. Maybe you’d like it?” 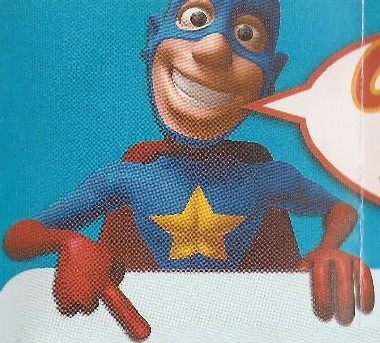 I get the feeling of a normal man in a costume from this guy. Just some athletic man who wore a costume to try to improve his community by crimefighting. But in a world with guys who can fly and shoot fire, maybe this guy finds it a hard job, as he would. And because of that it isn’t quite so insane that this guy would have to resort to taking advertising jobs. He probably also does exhibition shows at carnivals and public service announcements where he tells kids not to talk to strangers. He’s the workaday hero who can’t help much, but does everything he can to help. But I bet there is some drawbacks. He’s bound to feel some resentment, and I doubt he personally enjoys every ad that he has to do. But bills need to be paid, even for a man in a cape.

So there we go. Two more superheroes who I am probably the only person who has ever discussed them on the Internet. I win again.