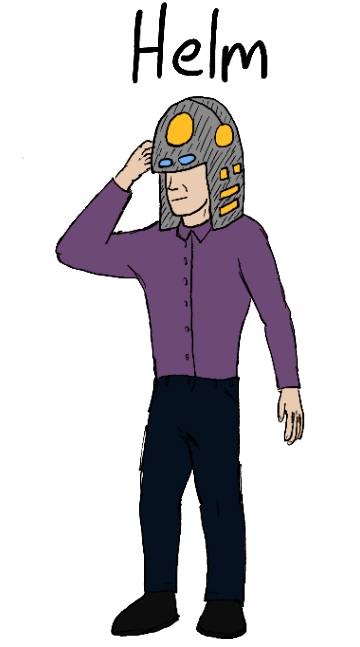 As he hit puberty, Craig began to suffer headaches. He heard voices and had trouble focusing his vision. He was lucky in that his parents were medical scientists who were able to discover the cause: Craig was developing some kind of superhuman mental powers. His headaches were caused by the fact that he could hear the thoughts of others. His loss of vision was because his vision was capable of detecting thought currents in the air. He was being overwhelmed by his new mental senses and it was killing him and that, in turn, began to cause him to emit powerful bursts of telekinetic energy. The invention of the Helm saved him. Built to block the information that reached Craig’s brain. He was alone with his thoughts again.

In the years since, Craig has tinkered with his Helm and improved. He can open apertures that allow mental impulses to filter in, and with practice he has learned the “language” of these impulses, so he can now essentially read minds. The telekinetic bursts that he can emit are also highly focused now, a useful weapon. All this made Craig a popular consultant for law enforcement agencies, who will often call on Helm to help solve fantastic cases.

Helm is the organizer of a loose-knit collection of mentally powered characters (I’ve mentioned them before). He’s somewhat inspired by Cyclops of the X-Men, though I am confident that many other examples could be found of characters who are trapped in something to contain their powers. 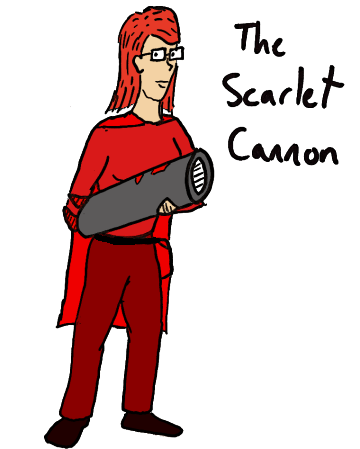 I admit, I had no particular idea where I was going with this one (and it shows). I decided I wanted to do another superhero with a color in their name and this is what happened. Such arbitrary methods can create unforeseen greatness, but not always. Still, if someone has to be a D-list superhero, the Scarlet Cannon is perfectly happy to do it. 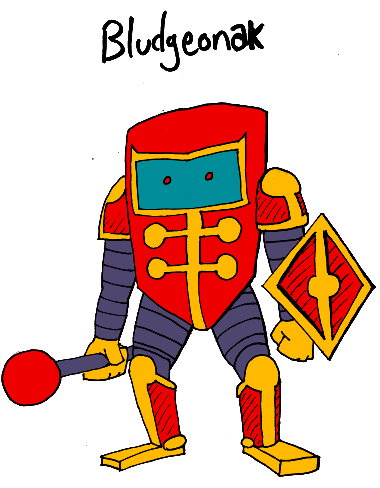 There is dimension called the Bronze Zone where there is a world ruled by an evil, powerful warlord called Oppressar. Oppressar holds power with the help of an army of pseudo-mechanical henchmen created from a cosmic-energy factory on the planet’s moon. But during a time of special celestial alignment one of the henchmen was created with more energy than was intended, making it smarter and stronger than its brethren. That henchman, designated Bludgeonak, saw Oppressar for the evil he is and escaped. Now Bludgeonak sides with the scattered rebels who live in the underground tunnels of the Exiled Gods of the Bronze Zone.

I was definitely going for a Jack Kirby vibe with this one (specifically his later crazy cosmic stories). Obviously as I am, at best, a reluctant artist, I don’t think I am fit to hold a candle to Kirby, but I couldn’t commit to a year of superhero creation without visiting his style. Bludgeonak was a character made up on the spot at the time of sketching, and his story made up on the spot again at the time of writing this. I don’t know why I decided to go with the headless torso kind of design (maybe I was thinking of Arnim Zola), but those circles on his chest are supposed to be his eyes. For the record, I’m picturing a color scheme of bright oranges and red mixed with black. 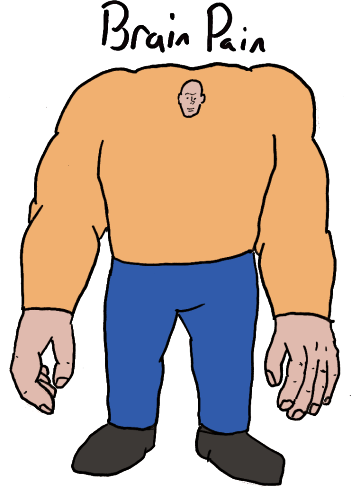 When J. Paul Dean was born, he seemed like an ordinary child, but as he grew older it was clear that something was wrong. While his body grew rapidly, surpassing a normal adult size by the time he was ten years old, his head never changed from its original infant size and appearance. And apart from the physical aspect, there was something else: he could read minds. In his late teens, he was contacted by the Mind Set, a loose community of mind-powered individuals who gave him a home and helped him adjust to society.

Now, as an adult, Brain Pain has become an adventurer working with the Strange Squad. He’s something of a celebrity superhero, appearing in television interviews and getting book deals. Perhaps most importantly: when he goes into dangerous situations, he wears a helmet.

Brain Pain is one of the characters I thought up as a kid (which is also my excuse for the name). The whole tiny head and massive muscles thing was supposed to be a twist on the frail telepaths with big heads that are the more common formula. It’s just clever enough that it stuck around in my memory.