This isn’t going to be a particularly deep one, but I just want to say I think that the Superman villain called the Annihilator and Annihilator Junior should come back. 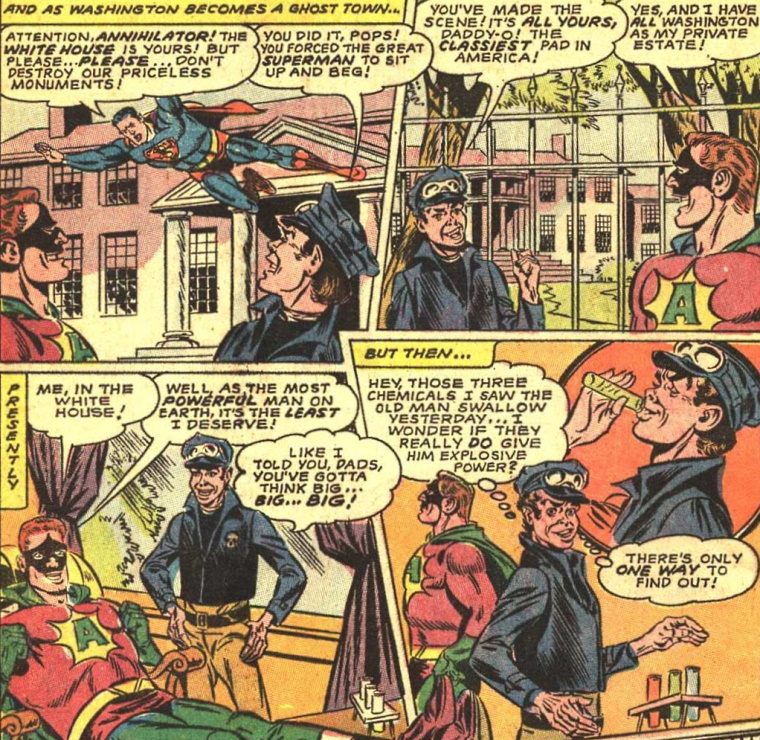 In one multi-part story in the Silver Age comics, the Annihilator was Karl Keller, a Nobel prize winning chemist who used Kryptonian chemicals to fill his body with explosive energy that made him powerful enough to defeat even Superman (because, as I’ve said, people who think Superman is too powerful are too lazy to remember you can just make powerful foes). Annihilator used his powers for a successful supervillain career and, on a whim, adopted a teenage criminal named Pete as his son. They did crime together, even managing to conquer America. It couldn’t last of course, and Annihilator soon realized that the biochemical process that empowered them was bad for their health. He tried to warn Junior, who assumed the old man was turning on him. In the end, somehow Junior was de-aged to a toddler and Annihilator, now reformed, got a chance to raise him right this time. It’s as dumb as the comics of that era always are, but it doesn’t mean there’s not potential for real stories there.

As far as I’m aware the characters have only appeared since in a Jimmy Olsen book that was going for comedy and treated them as jokes. That’s fine, that book was fine, it’s fine. But these characters don’t need to be jokes.

All it would take is for a story that treats the characters more seriously than a Silver Age Superman comic. That’s not difficult. We can keep the idea that Karl is a brilliant scientist who dislikes Superman (a bit overused, but it’s fine), but we need to establish that he’s been raising Pete for more than a week. If he’s a single father trying to raise an adopted son who has been getting into trouble, you wind up with a villain who can go up against the Man of Steel but who has more complicated motives. Does Karl want to keep Pete out of the life of supervillainy? Maybe that could work. Or we could position Karl as an opposite of Pa Kent, actively teaching his son to abuse his power. I’d probably go with that latter take, because it was the fact that Clark is also an adopted child that made me think it’d be good to have the Annihilator(s) around for stories about adoption and family.

Of course, we also need to give them a Super-Pet. Some sort of Annihilator Ferret or something? Look, we can take the stories seriously and still have goofy fun, okay?