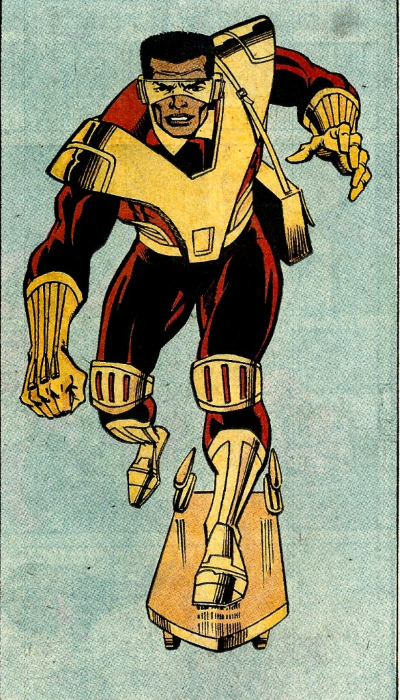 To begin my grand project of talking about Rocket Racer incessantly, I should get the basic details out there. What follows is a history of the Rocket Racer, completely from memory. If I miss anything, expect me to get a whole post out of correcting it later in the year:

Robert Farrell was born in Brooklyn, New York. His father’s name has not been revealed, but his mother is Emma Johnson Farrell. His parents would go on to have six more children after Robert, Bob for short, so he had to help out a lot around the house. At a young age Bob developed a love of science, frequently winning school science fairs and such. A bright future seemed to be ahead of him.

At some point, apparently while Bob was in high school, his father left the family. The exact details of the matter are unrevealed, but it is known that Bob now sees his father as a failure, the kind who shirked his responsibilities. In the father’s absence Bob stepped up, taking jobs to help support the family. It seems like this is the era when the Farrell family left Brooklyn to live in Harlem. This setback surely hurt Bob’s potential for a career in science, but it wasn’t the final nail. After graduating high school, Bob joined the Air Force on the path to becoming an engineer. This career path was derailed, however, when Emma became deathly ill. Bob quit the academy to help support his family.

In his early twenties, supporting a family of six children while paying his mother’s medical bills wasn’t easy for Bob. Existing as he does in the Marvel Universe, it occurred to him to create a rocket-powered skateboard (using parts salvaged from a junkyard), as well as various other high-tech accoutrements, and begin a career as a super-criminal known as the Rocket Racer. This brought Bob into conflict with the masked vigilante Spider-Man, who stopped Bob mid-crime and left him on the hood of a police car. Bob spent at least some time in jail after this, but it wasn’t the end of his career by any means.

Learning more about NYC’s super-criminal underworld, Bob took his equipment to a man called the Tinkerer, who improved on his technology for a cut of 25% of any profit Racer made on his crimes. Bob would go on to attempt to blackmail an embezzler, which would result in another fight against Spider-Man, though this time Bob escaped. Bob continued his career for some time after this, but eventually Spider-Man and the police did capture him again. This time, the Rocket Racer went to trial for his crimes and faced a prison sentence, though the judge recognized that Bob was trying to support his family and had a lot of ties to his community. He was released on bail, which the family could only afford by going through a bail bondsman. Unfortunately, the bondsman was quite corrupt, intending to force super-criminals to do crimes for him. He also intended to ensure the loyalty of future criminals by making an example of what the Rocket Racer. He hired a “Bounty Hunter” with the intent to kill Bob. This time, the intervention of Spider-Man was to Bob’s benefit, as the vigilante stopped the Bounty Hunter and saved Bob’s life. Bob decided at this point to give up the career as Rocket Racer and go back to school.

And Bob would indeed wind up enrolling at Empire State University, but his super-career wasn’t over. When Spider-Man wound up in trouble, Bob felt he had to help out, so he got back into the Rocket Racer identity and teamed up with a group of people who wanted to help Spider-Man (including the Prowler, Puma, Will o’ the Wisp, and Sandman, with whom Bob would remain friends). After their success, this group would be offered a chance to do freelance super-mercenary work for a woman named Silver Sable.

In what may be the high point of Bob’s life, he balanced a career making legal money as the Rocket Racer with school. On one mission for Sable he encountered a small-town Sheriff, with whom he struck up a friendship, perhaps finding hope of a new father figure in his life. He even did some pro-bono superhero work, such as fighting neo-Nazis and even aliens and monsters. He was able to support his family and felt like his life was progressing in a positive direction. This would not, of course, last nearly long enough, as jobs with Sable eventually stopped coming. Bob turned to general bounty-hunting gigs. But even that wasn’t enough, so Bob and his friend Hobie Brown (the Prowler) tried to join a group called the Great Game, in which rich people would sponsor super-fighters to engage in combat for spectacle. Even though Bob and Hobie tried to fake their fight, it still ended badly when other combatants took the combat seriously.

Despite a lot of financial struggle (and one instance of a supposed friend trying to steal his Rocket Racer equipment), Bob did finally graduate thanks to student loans. The exact details of Bob’s criminal career after graduating are unknown, but he wound up in prison for real. And worse, it was a high-tech prison designed for supervillains, which was extremely cruel to the convicts, even using experimental techniques to modify their behaviour. When a rich person offered a chance for Bob to get out of prison (to again work as a performative supervillain on whose fights the elites could gamble) Bob took the opportunity. This again brought the Racer into conflict with Spider-Man and again, Bob tried to turn away from his life of crime after this.

When his friends Hobie, Will o’ the Wisp, and Puma all attended the wake for the supervillain known as Stilt-Man, Bob went with them, though not in his costume. Unfortunately, the wake was attacked by the vigilante known as the Punisher, who poisoned the attendees, then blew up the bar. Bob was nearly killed, but pulled through after some time in hospital. Bob’s mother, however, became ill once again, and lapsed into a coma. The exact details are as yet untold, but it seems that, rather than saddling his family with more of his mother’s medical bills, Bob took Emma away from them, possibly without their consent, and kept her alive on a life-support system in a supervillain-style warehouse lair in Brooklyn. It has to be assumed that at this point the youngest of the Farrell children are being raised by those who are just a little younger than Bob.

Bob was recruited by the supervillain MODOK into a vast cosmic heist scheme, but Bob sold out his fellow criminals to the law-enforcing organization SHIELD, though it is unclear if SHIELD ever came through and gave Bob money. They may have cleared his record or something, because when next seen he was part of Avengers Academy, where he was being trained alongside many other students (all much younger than him) to become a part of superhero. Again, this path wasn’t profitable enough for Bob’s needs, because when a chance came up to quit the Academy for a more profitable career, he did so. That seems to have also turned out poorly, because any time we’ve seen him since then, he has been struggling and often resorting to crime.

So Bob’s path is one of unfulfilled potential. He tries so hard to get into a better life, but his familial responsibilities have always come first for him. He has tried both sides of the superhero/super-criminal thing, but neither has been lucrative enough for him to get by.