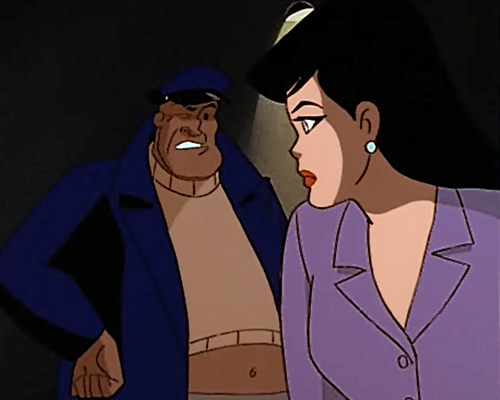 Today’s topic is Bibbo Bibbowski. Bibbo is usually depicted as one of Superman’s biggest fans. When Bibbo first became a fan of Superman, he did so because Superman was the strongest. That was what Bibbo valued: strength. Thus, things weren’t always great for Bibbo when stronger villains came along to beat up Superman.

But, like Jimmy Olsen, Bibbo’s arc is one of being improved by learning from Superman. Over time Bibbo came to realize that it isn’t Superman’s strength that makes him great. It’s what he does with it. We live in a society where, unfortunately, people with power don’t often enough use that power for the benefit of others. Superman needs to show why that’s the wrong way to use one’s powers, whatever they happen to be. And Bibbo can be a great example of that in the stories.

In the original comics where he appeared, Bibbo was very poor until he won the lottery and went on to buy a bar down by the docks. This gave some of the characters a place to hang out apart from the Daily Planet, which is great. In other media he has occasionally be depicted as owning the bar without starting off poor, but I like the idea that he has suffered and come through. I also like that he is nearly always depicted as a “low-class” sort. He’s been a punch-drunk alcoholic boxer, a dumb dock-worker, and an lowlife informant for Lois Lane. I like that he can be all these things and still be, ultimately, a good guy. It’s a good message to send that you don’t have to be a hoity-toity type to be a friend of Superman.