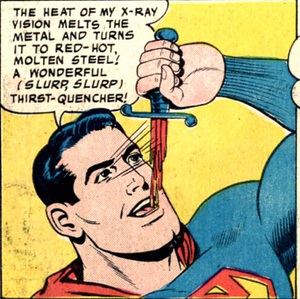 Obviously, I have a lot of daydreams about writing Superman. But what kind of Superman book would I want to write? The way I figure, there are two options:

One would be a book that begins with Clark in University, early in his career as Superman, and which follows his life for 200 issues or so and we end thirty years later or whatever. The main benefit here would be that that amount of continuity under a single writer would make things matter. If Superman brings a criminal to justice, that criminal would be in prison. They wouldn’t inexplicably turn up again and negate the accomplishment of catching them. If a supporting cast member is killed off, they’d be gone for good, and not alive again with the next reboot. For this time, in this standalone book, the stories would have lasting consequences in a way which I don’t believe has ever happened for Superman before.

The other book I’d like to write would be almost the exact opposite. An “all-ages” book where every issue is a standalone thing. Not that there wouldn’t be ongoing details, but I’d want to make sure that every issue has a full story that someone could pick up and read and get a complete experience. The Old Timey Superman idea I brought up before would be fine for this, but it could literally work with any version (and it could work for a Superboy series starring Jon Kent as well). Once you’ve got a status quo that works, stop breaking it and just tell stories there. Furthermore, I’d make sure that every issue included at least one educational element, be it some sort of lesson about science or how clocks work (because Clark Collect Clocks) or whatever. I’d try to make the lessons subtle, but I’d want kids to get something of value out of their time, hopefully without even realizing it.

Those would be my ideals. I’d also enjoy doing a daily comic strip. If Spider-Man can still have an ongoing comic strip, surely Superman should.

But, of course, I’d obviously be willing to write anything in the Superman franchise. I’m not holding out for only these things. I’m nobody DC has ever heard of. I have no clout. But those are what I dream of when I fantasize about this stuff.