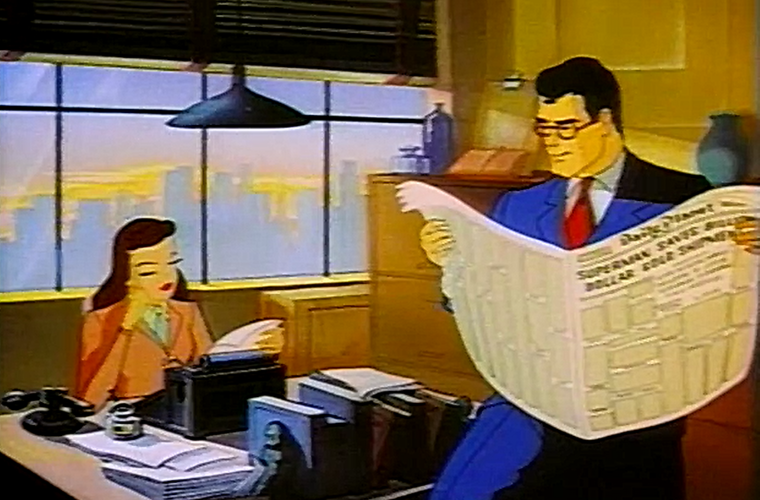 I’m gonna spend this week’s Superman Thought on proposing a book I’d like to be reading (and would love to be writing). Over the past decade, DC has had some success making a book based on the Batman ’66 series. I’ve said before how the Superman show from the 50s failed to become as iconic for its star’s cast as the Adam West shows did for Batman’s villains, so a show continuing that series wouldn’t be as much fun if it stayed true to only that source.

But what if we didn’t limit ourselves to just that show? What if we also drew from the Fleischer cartoons of the 40s, and the serials that predated the Reeves show? Heck, let’s even draw from the radio show. Suddenly we have source materials with much more character and vibrancy. I propose that the show could be called Old-Timey Superman*.

Like the Batman ’66 show, Old-Timey Superman could tell simple stories done in an issue or two and free from the continuity of other books in the franchise. With those sources, the stories would be noir-tinged giving the book a style unlike most of the other Superman stuff around these days. For our visuals, I think it would be best to use the cartoons as inspiration as much as possible, but for characters who didn’t show up there we can take what we need from the other sources. Luthor never appeared in the cartoons, but he was in the serials. Bill Henderson and Candy Meyers from the radio have no visuals but the Reeves show provided them. Using all the sources together, we’ve got ourselves a little world as rich as Batman ’66 but different enough to be its own thing.

While there are a handful of villains from the radio show I think deserve a comeback, this would be a fine place to start it, it would also be fun to take characters who have only appeared since those days and create Old-Timey versions of them. Can we imagine what General Zod or Doomsday would be like if they’d debuted in the 40s cartoons? I’d sure like to.

If someone starts a petition demanding that I get to write this, I’m on board.

*That title is not a serious suggestion, but everything else here is.