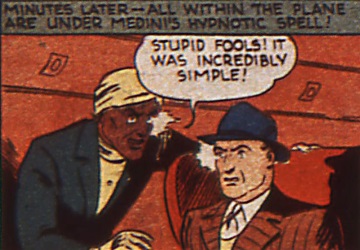 Medini is one of Superman’s very first super-powered villains, possibly the first. The Ultra-Humanite came before him, but was mostly human with cool technology at this point. Medini is also one of, if not the, earliest non-white characters to appear in Superman. I put it to you that these historical accomplishments mean that Mednini deserves to make a comeback.

For the record, Medini is a hypnotist who appeared in a single story back in Action Comics #25 way back in 1940. Although he does have actual mental powers, he is also a scam artist, getting people to come use his supposed services and actually hypnotizing them into doing crimes for him that they later don’t remember. It would have been a perfect scheme if not for that meddling Superman.

Worth noting: for a non-white character created in 1940, Medini is somehow manages to not be a racial caricature. His powers and turban do kind of suggest an “oriental mystic” sort, but I get the impression he is playing into that image for his scheme. And, incidentally, I actually kind of love his yellow and green suit/turban/gloves look. We never learn where he’s from, but there’s no accent and he’s not drawn as a subhuman creature. He could easily be a surprisingly decent depiction of a South Asian or Middle Eastern guy for that era.

I figure that the Superman books need a solid cast of recurring C and B-list villains. They aren’t the type who get big arcs or imperil the world or anything, but they can be there for a fun standalone plot now and then. That’s where Medini should be.