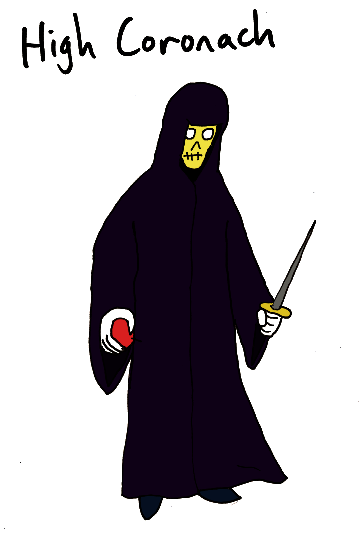 Death comes to all things that have life. This is the truth of the universe. Nowhere is this more apparent then the city of Cemeteria, the city that borders the spiritual realm. Naturally, with that proximity to the beyond, a system of ritual and religion has built up. The majority of Cemeterians revere the idea of death, not only as an ending, but as a source of continuance. The apple dies, but the one who eats it gains nourishment. So it is for souls. When a person dies, the afterlife becomes stronger. The crux of it involves the quest to make sure the souls feeding the afterlife are good ones. The head of this religion is the High Coronach. Elected pope-style, from the lesser clerics. When the city of Cemeteria is exposed to the world by a supervillain’s attack, the Coronach wants to start spreading the religion to the rest of the world. This proselytizing is not welcome everywhere in the world, and so the ruler of Cemeteria, Queen Deathknell, has to try to smooth things over politically.

I remembered Queen Deathknell just recently and figured “Hey, that’s a pretty ‘supernatural’ idea, lets build on that” so I’m doing it. The next character is also from Cemeteria: 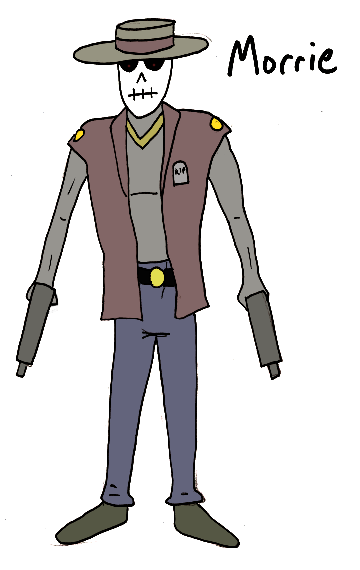 Cemeteria is not a perfect place. As with any large city, there is a criminal element. But they have to deal with Morrie. Morrie has served as the police chief of Cemeteria for over a century. With supernatural gun-summoning abilities, Morrie has stopped the soul smugglers and ghost bandits and, of course, grave robbers that are brave or stupid enough to try their luck. Morrie is a grizzled, rough old man, who was a great ally to Queen Deathknell’s mother and is now especially protective of the current monarch. While this is very welcome when it comes to him doing his job (Cemeteria doesn’t have a military, at least not yet), he has been known to cause some embarrassing situations when dignitaries from the outside world are in town.

It doesn’t come across too well, because I’m not good at this, but Morrie is supposed to be unnaturally tall and lanky. I had the Arch-Vile from Doom in mind. I named him Morrie as a reference to the phrase Mememnto Mori, which seemed appropriate.