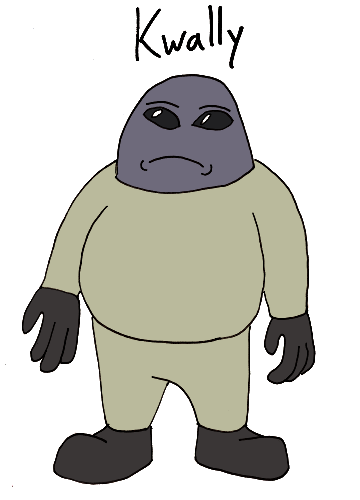 Kwally is a being of pure mystical energy that runs a club for wizards. Originally having been created by a wizard in a distant mystical realm, Kwally wandered the cosmos for untold years before deciding that wandering was exactly what it did not want. Kwally wanted stability, a permanent address. With that in mind, Kwally created a pocket universe that contains only the interior of its clubhouse. Kwally lives there now, and has not once left since.

Though sedentary, Kwally is not asocial. Any being capable of find their way to Kwally’s door will be met with a hearty welcome. In this way Kwally has met a lot of wizards, and become something of a hub for their social scene. Beings from all manner of strange places come to Kwally’s to hang out. But if any misbehave, Kwally is powerful enough to make them regret it.

Kwally is a character design (name included) that I found on a scrap of paper dating way way back, but I didn’t have a story for it. I don’t think I lost the story, I just think I never bothered to make one. Well, here you go, Kwally. 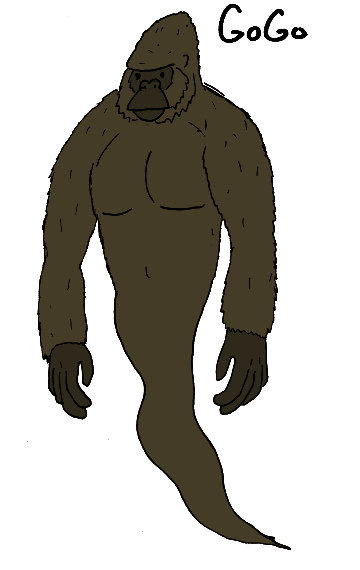 Gogo is a gorilla ghost.

Gogo was born in a zoo, but wound up as part of a research study with some other apes. The researchers tried to teach the apes to read, with varying degrees of success. Gogo, it seemed, was the least successful. Compared to her fellows, Gogo struggled to read English. But the other apes were so successful that the researchers gained notoriety, and the apes were given a number of books as donations from a charitable public.

Somehow, whether by mistake or by some sinister purpose, a book of occult knowledge came in among the gifts. With large sections of the book not in English, but in some apparent gibberish, the other apes cast the book aside. Gogo, however, had a natural knack for strange ritualistic language of the book and kept it to herself, learning secrets of the universe that even her human masters did not know. Before long, she rebelled against her captors, killing the other apes, as well as some of the researchers, before being shot dead. But with her knowledge, death was not the end for Gogo, it was merely a means of escape.