Some surprise hours at work mean I’m running late on this Super Sunday, but who cares right?

Last year, during the Superhero Sundays, I spend July doing the supporting cast of my Justice-Man character. This year, I’ll do some of his villains. 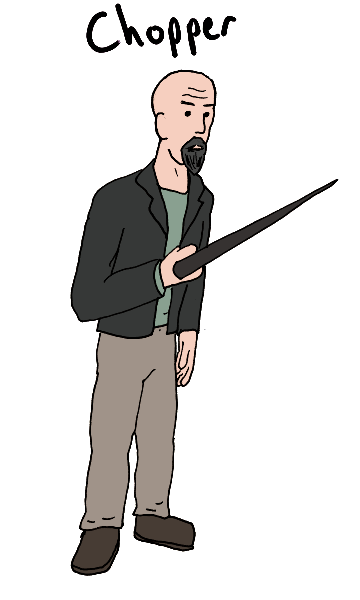 The Chopper is Justice-Man’s arch-nemesis and he’s the most feared man on the Earth. Samuel O’Hara inherited powers from his father: He can generate blades of telekinetic force from his forearms that can cut through pretty much anything. That’s neat and all, but it isn’t a power that would alone make someone the most dangerous in a world full of superhumans, but O’Hara makes up for that by being a ruthless and cunning criminal mastermind. O’Hara started as a serial killer in his teens. Eventually he was caught, but his powers caught the notice of a mysterious unknown organization. Freeing the Chopper to use him as a field agent, and later as an instructor for other agents, the organization gave O’Hara the time and freedom he needed to sow the seeds he would later use to build a criminal empire. This same organization would later use a teenage boy as a weapon, the same boy who would become Justice-Man, but by then the Chopper was on his own.

Now, decades later, Chopper’s biggest asset is his ruthlessness. He runs an international organization that includes armies of robots and cyborgs all completely loyal to their brutal master, but law enforcement agencies, and even superheroes, are reluctant to work against him. Chopper’s powerful army keeps other, potentially worse villainous groups from gaining a stronger footing, and any good guy who does try to oppose them is met with swift retaliation against friends and family. Only Justice-Man is willing to do anything against O’Hara and even the other heroes tend to think he is riling up a force he shouldn’t. 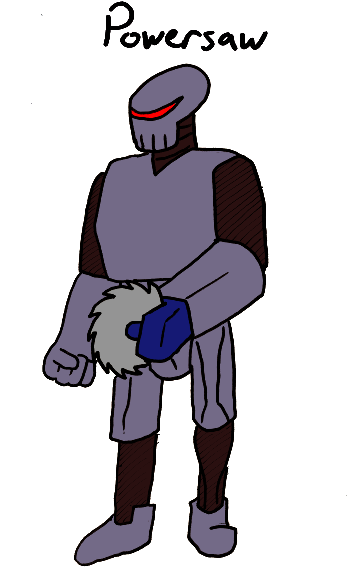 Powersaw was once a woman who just happened to find some sort of magical unbreakable saw that seemed to be able to cut through anything. Using this as a mercenary, the woman took the name Powersaw. As time went on, she had the blade cybernetically attached to her arm, and since then has been replacing more and more of her person with cybernetics. She’s not worried about losing her humanity, though. After all, a person who discovers a magic saw blade and her first instinct is to use it as a mercenary isn’t all that high on humanity to begin with. Justice-Man encounters a lot of superhuman mercenaries in his career and Powersaw is one of the toughest.

It was not intentional that I scheduled two villains who could cut through anything today, but I don’t care. Deal with it.