Sam Dennis spent weeks alone in the woods. His thoughts never left his butchered family, their remains still in that clearing.

By day he meandered about in a haze, never straying far from the clearing. He found the family car. The cultists had pushed it into the woods so it couldn’t be seen from the road. At night he slept on the rough ground under the car, worried that if someone came along they’d look inside.

He found the road where he and his family had been attacked. He could follow the road to town, but then what? He had no way of knowing who he could trust in town. Or anywhere.

So Sam Dennis spent weeks in the woods. Alone.

He also found a small stream and drank from it, out of habit more than noticing any thirst. On occasion when he found berries he would absentmindedly taste them. Perhaps if he were older he’d have wondered why he wasn’t starving to death, but the thought never crossed his mind. He also failed to wonder about the absence of animals, for nothing bird, mammal, or even insect came close to the clearing.

Weeks began to pass and Sam grew accustomed to this way of life.

He had to bury them.

He couldn’t say why, but Sam decided that he should bury his family. Perhaps it had come to him in a dream, for he had awakened thinking it, but he couldn’t remember now.

The sun hadn’t risen yet. There was no moon. Still, Sam was habituated to the darkness and made his way from the car to the clearing easily. He had not been to the clearing at night. Not since the first night anyway, and he was surprised to find that it glowed. Specifically the stone mound left by the cultists seemed to radiate a sickly green aura. This pale light caused unease in Sam, a sense of something being misplaced, but he ignored it.

He approached the bodies of his family. Though they were stiff and pale, they were in pristine condition. No animals had wanted to eat these bodies, it seemed. Even the bacteria that should have claimed them were uninterested.

Sam began digging in the pit where a fire had been. He used his hands. As he worked the sun rose behind him. As it got higher, Sam began to sweat while he worked, but he did not slow down. By noon, the hole was deep and wide and Sam’s hands, with dirt caked under broken nails, were starting to ache.

He took the bodies one at a time and dragged them to the grave. First his mother, then sister, then finally his father. They would like being together, he told himself. Families should be together.

He cried as he filled the grave again. First softly, then weeping, but by the time it was filled he was silent again. He seemed to run out of dirt before the grave was full, which he found strange since there were three bodies in there now as well, but it was close enough. After a rest it occurred to him to mark the grave. He went to the pile of stones and grabbed one of the larger rocks. He looked at it and then noticed again the glow.

The rock was tainted somehow. All of these rocks were tainted. Sam kicked at the mound and it crumbled, rocks rolled to the ground.

His work done he went to the stream to drink, and then washed himself.

Sam was awakened by a light. Or perhaps it was a smell. In any case, something was nearby. Staying prone, Sam positioned himself near the wheel and peered out.

A skull seemed to be floating through the trees.

It wafted gently, slowly, but independent of the breeze. It would occasionally stop. Turn. Apparently look at things. Then it saw the car. It came nearer.

The skull glowed. It reminded Sam of the tainted rocks at the clearing, it was weeks since the burial now, but the skull did not seem tainted. It seemed to glow correctly somehow. Or perhaps to smell correctly. Sam could not tell.

Sam lost sight of it for a moment as it circled the car, then seemed to pass through the car door to the inside. Sam found it again at the back of the car where it was apparently looking at the plates. It floated downward. It was looking under the car now. It was looking at Sam.

“Whaoo!” came a strange inhuman noise from the direction of the skull. Sam scrambled out of there, hitting his shoulder on the frame of the car.

Once to his feet Sam ran. “Raai!” the skull moaned behind him. Sam ran through the dark woods faster than he thought he could, but in a moment the skull was beside him. It floated there and looked at him. Sam swatted at it, but his hand passed through the air, feeling nothing.

Sam continued running and the skull kept pace apparently effortlessly. It moaned again and again. Sam tripped on a rock and fell on his face. Getting back up, he stared at his pursuer, who had stopped with him and now watched. 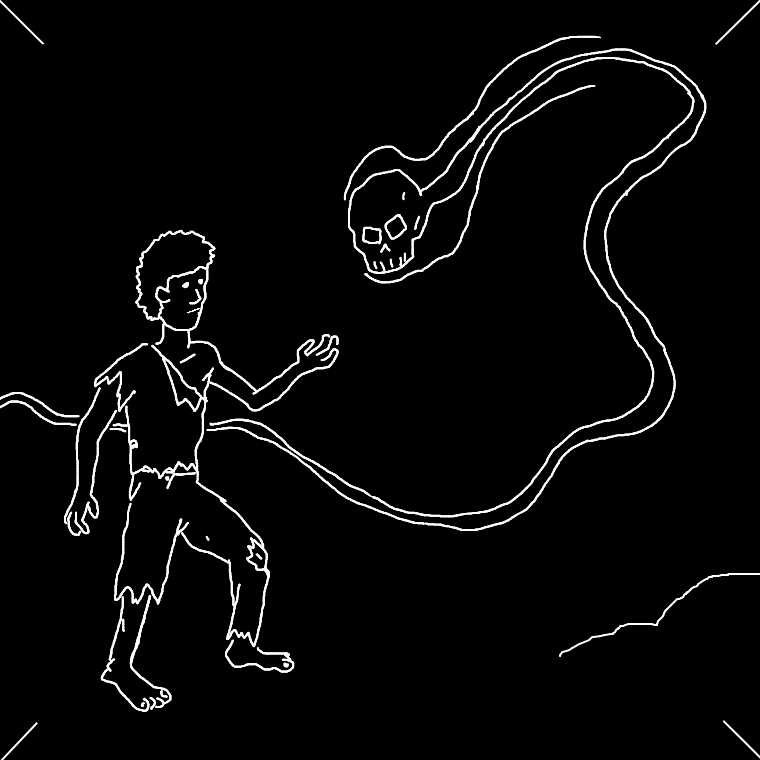 Sam was tired. And sore. And terrified. The skull seemed almost serene as it bobbed slightly in the air and stared.

The punch passed through the ghost and hit a tree, which shook violently. Wood splintered and flew. Sam had left a fist-sized hole in the tree, but he didn’t even notice. He turned and swung again.

“Saaaarrrhh,” the skull moaned as Sam passed through it again.

This time his attack smote only the air and Sam lost his balance and fell to the ground. He began to kick his feet.

“I didn’t mean to scare you, kid. I didn’t know there would be anyone out in these woods, let alone one who could see me. And it’s been so long since I’ve had to talk, I kinda forgot how. Are you okay?”

Sam got to his feet. He hadn’t spoken in a long time either, but now he said “What are you?”

“Sam,” he replied after a moment.

“Well, gee, Sam. I’m sorry for scaring you like that. What say I walk you back to… back to your car, I guess, and you can tell me why you can see me.”