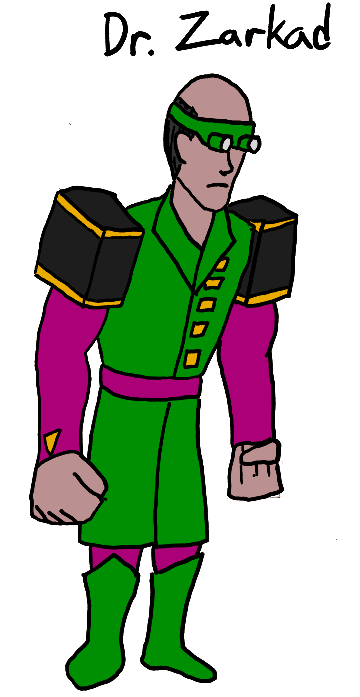 A physicist of world reknown, Dr. Zarkad was performing and experiment, trying to teleport a lab rat across time and space. The experiment backfired and Zarkad and his entire laboratory (except the rat) were taken apart and rematerialized in the Bronze Zone! Discovered by the soldiers of the tyrant Oppressar, Zarkad bargained for his life and those of his assistants by offering fealty and service. Oppressar recognized the value of scientific knowledge and had his forces construct a gigantic laboratory/fortress in which to construct all manner of experiments, so long as the results would benefit Oppressar’s rule.

Dr. Zarkad quickly came to revel in his new position. With access to the Bronze Zone’s cosmic technology, Zarkad saw results to his experiments that he never saw on Earth. He was unlocking the secrets of the universe and didn’t care how his findings were being used. Naturally this led to the Fortress being attacked by Bludgeonak and those who rebel against Oppressar. Zarkad, seeing them as terrorists trying to prevent his learning the truths of the cosmos, began to create new and more powerful weapons that would hopefully be able to destroy Oppressar’s foes. 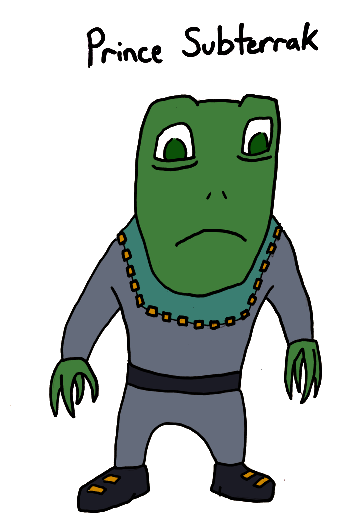 The Kingdom of Twenty Caves is not an evil place, it’s rulers, King Stalactor and Queen Spelunka are loving rulers who care for the populace and maintain peace between the Twenty Caves, each made up of a different tribe (Rock People, Lizard People, Mole People, Slime People, and so on). Their son the Prince, however, is a jerk.

The powerhungry Prince Subterrak wants to rule the surface world. He knows he will someday inherit rule of the Twenty Caves, but it is not enough. Not when an entire world is above him, out of his reach. With an army of loyal soldiers, Subterrak makes journeys to the surface, attempting to seize territory or destroy targets of military value.