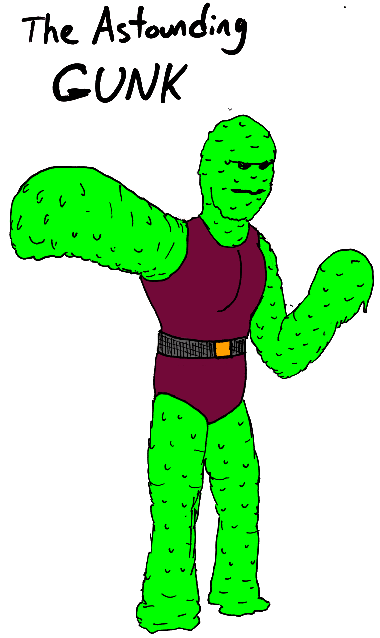 Lynn Leaton was a brilliant scientist working on some sort of super-science experiment when she was caught in a chemical explosion. Her body mutated into a sort of viscous slime, and her mind went blank. This astounding Gunk went on a rampage, destroying the laboratory and several surrounding buildings, then fled. Now the Gunk wanders the countryside and has no memory of life as Lynn Leaton, except when it sleeps and dreams with Lynn’s thoughts, usually leading the Gunk to wake up and try to do things that Lynn would do, but without Lynn’s consciousness to guide her. hunted by her former colleagues and by the military, who have to stop the Gunk to keep the public out of harm.

Our society places an awful lot of importance on the appearance of women. It’s true that the vast majority of male action heroes are super handsome, but you can get away with all sorts of deformity in a male protagonist that you don’t see in females ones. Especially this particular kind of mutated-into-a-monster-person type like the Hulk or the Thing. Off the top of my head I can think of very few women who fit that kind of niche. There’s some She-Hulks, but you’d better believe they’ve got bodies that aren’t exactly frowned upon. There is Sharon Ventura, who goes back and forth between hottie and monster, but she is, and the She-Hulks for that matter are too, just female versions of the male characters. I don’t doubt that there is a few ladies trapped as monsters in comics, but I don’t know them off the top of my head.

As an extension of that, you can get stories where the mutated male hero gets an attractive woman who falls in love with him. It’s the Beauty and the Beast thing, and it is almost never the woman who is the Beast of that pair. Sure, Ben Grimm’s first love interest as the Thing was a blind woman, but even there, she knew full well that he was a dude made of rock, and there have been other, sighted women who also fell in love with Grimm in spite of his looks. So, if I were to make some sort of Astounding Gunk comic, I’d have to explore that route, with a man who is in love with Lynn. Maybe he’s trying to track her down and help her find help, but with her lack of memory, she continues running from him like everyone else. Something like that.