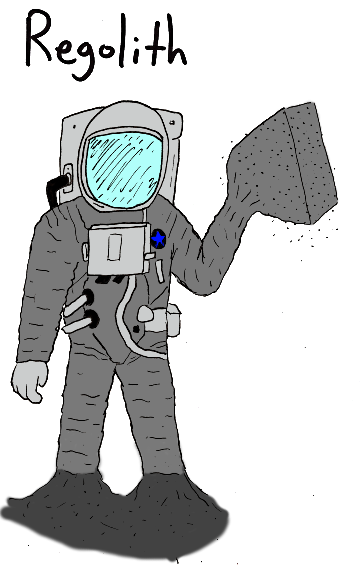 Dr. Amanda Freeman was an astronaut performing scientific experiments on the moon, but a key piece of equipment malfunctioned and sent a wave of reality-warping energy coursing through Amanda. When she recovered, she found that she was transformed into a being made of the same material as the moon’s surface. Amanda found that she could now reshape her regolith-body into all manner of different forms. Unfortunately, her “at-rest” form includes her space-suit, which she can not remove. She continues to use her powers to help the space program, but is always seeking some way to return herself to normal.

Regolith is a character I made up for the sketch. Basically, Regolith is a good guy, moon version of Marvel’s Sandman. I threw in the bit about being trapped in the space-suit to add a bit of a tragic drawback, like many of the classic superheroes have. She’s not likely to be the type of superhero who goes around foiling bank robberies, but she would be right at home foiling alien invasions and the like.