I am trying to flesh out the show-within-a-show science fiction franchise that exists in the universe of my stories of Magic Astronaut Hunters, Rogue Beekeeper, Phone Guys, and cetera. This is the show that fills the niche that Star Trek fills in our real world, but it is not meant to be a direct parody of Star Trek. Just a similarly long-running series that characters would reference. For the most part I am going to take concepts and names I have in my notes that don’t otherwise have a home and stick them in here. If possible, I’d also like to mooch ideas for episodes or characters from other people. I am gathering such notes on this page for the time being as a work in progress.

The details I know thus far:

Like Star Trek, I figure the show started at some point in the 60s. The original show established most of the concepts that the later spinoffs would follow. It’s about a pseudo-military organization that travels between alternate Earths having adventures and whatnot. They profess high-minded values about making the worlds better, and if you ignore certain elements of the show, it presents a case for progressive values.

For budgetary reasons, most of the alternate worlds that the team visit are pretty basic. They probably reuse sets from other shows and movies, so they wind up in viking worlds and western worlds and whatnot. One of the main concepts that the show uses is AltEvo worlds (terminology borrowed from the PDR RPG) which are Earths where some animal other than apes rose to the dominant life form. Because of the limited budget and imagination of the creators, these AltEvo worlds are peopled by humanoids who have one or two traits to represent their animal sides.

The main star of the original series was Clive Hyde an actor who was at his peak in the 40s. He stars as General Eric Whiteman, the leader of the world-hopping team.

Among the rest of the main cast of the original series would be Hengorr the Outcast and Harry. 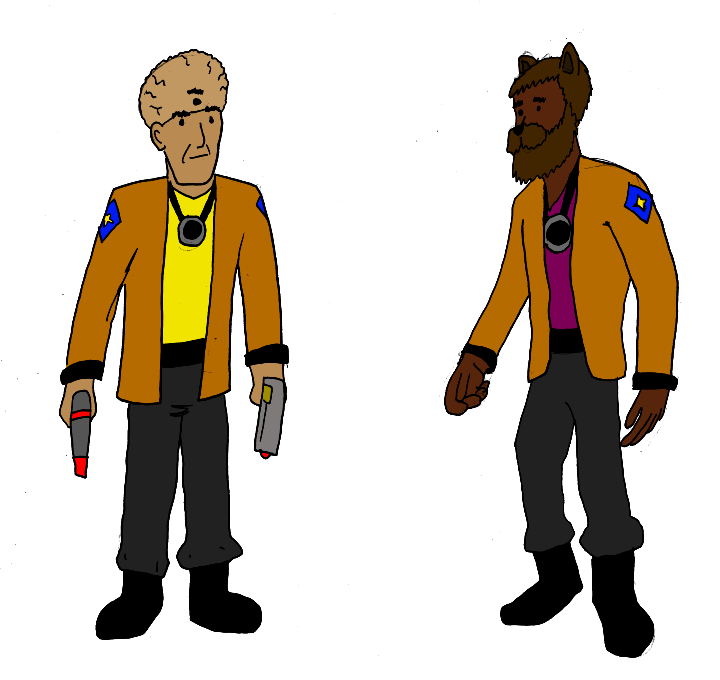 Hengorr is a HighEvo, which means he is from a world “more highly evolved” than regular humans, which is why he’s got a big brain and a third eye. He is an outcast from his society because he has chosen to aid the humans in their mission.

Harry is from a world of bear AltEvos. His role on the show would be similar to Scotty on the original Star Trek, but he would be played by a Black actor, and this would be one of the things that gains the show esteem for its progressive values.

I figure the show was not cancelled as early as Star Trek, but would go on for a long time so I can just make references nonstop to episodes and ideas they did. But the next main thing is that in the 90s the show was relaunched with a new cast.

The 90s cast included a young boy, probably about twelve years old when the show started, as a character intended to appeal to young viewers, but who was quite unpopular with older viewers. This as-yet unnamed character was played by Jackie Titan for about five or six years. There is also an AltEvo character whose makeup looks better than the ones on the original series, from a reptilian or insectoid species.

Jack Titan, as an adult, is a washed up former child star who hates the show, but still uses conventions and selling autographs and stuff to make money. He is also a prominent member of the Magic Astronaut Hunters team.

THE SPINOFFS AND MOVIES

After the success of the second series, the franchise has never gone away. There are more shows, as well as comics, movies, books, and games set in its world.